I am thrilled to announce my first publication about Victoria Santa Cruz’s years at Carnegie Mellon University School of Drama. This article (in Spanish) offers a preview of some of the material that will appear in my book. Thank you to Virginia Yep for inviting me to contribute to a special dossier about Victoria Santa Cruz in Cuadernos de Música Peruana issue 17, alongside illuminating articles by Alina Santa Cruz and Octavio Santa Cruz. Thank you also to Pamela Narbona for English-to-Spanish translation. Don’t miss the historic photographs and theatre program images, courtesy of Octavio Santa Cruz and Carnegie Mellon University archives. And heartfelt thanks to the numerous students, accompanists, colleagues, collaborators, company members, family, and friends of Victoria Santa Cruz who have shared their memories with me and made my research possible. Download my article here: http://cuadernosdemusicaperuana.com/

Thank you to Carnegie Mellon University School of Drama for posting my article about legendary CMU professor Victoria Santa Cruz on the occasion of her Centennial. Don’t miss the photos and video links!

I am grateful to Juliet Chambers-Coe for highlighting my presentation about Victoria Santa Cruz’s approach to rhythmic education in Juliet’s recently published journal article about the 2021 conference “Rhythm in Acting and Performance.” This memorable conference was led by Eilon Morris at Leeds Conservatoire UK, and organized in collaboration with The Makings of the Actor and the Labanarium. 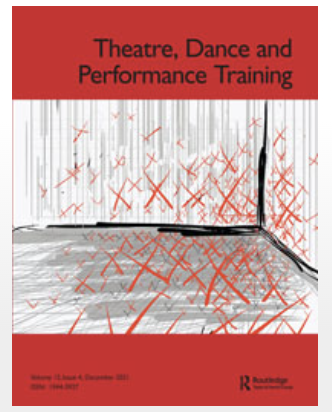 I was honored to participate virtually in the Centennial kickoff event, held in Lima and broadcast live on Cultura 24 / Facebook TV. The program included remarks by Victoria Santa Cruz’s former colleagues, company members, friends, and family; presentations by representatives from Peru’s Ministry of Culture and UNESCO; tributes by international artists inspired by Victoria Santa Cruz; music and dance performances; and more.

For non-Spanish speakers interested in learning about the Centennial, I have created two video excerpts from the event with English subtitles (thanks to Swarthmore College intern Andres Villalba for captioning assistance).

Video Excerpt: Announced plans for the Centennial year, in a video created by the Ministry of Culture’s Victoria Santa Cruz Centennial committee.

Video Excerpt: My remarks on the occasion of the launch of the Victoria Santa Cruz’s Centennial year.

Here is the entire event (in Spanish without subtitles). Fast forward to 16:31 to begin: 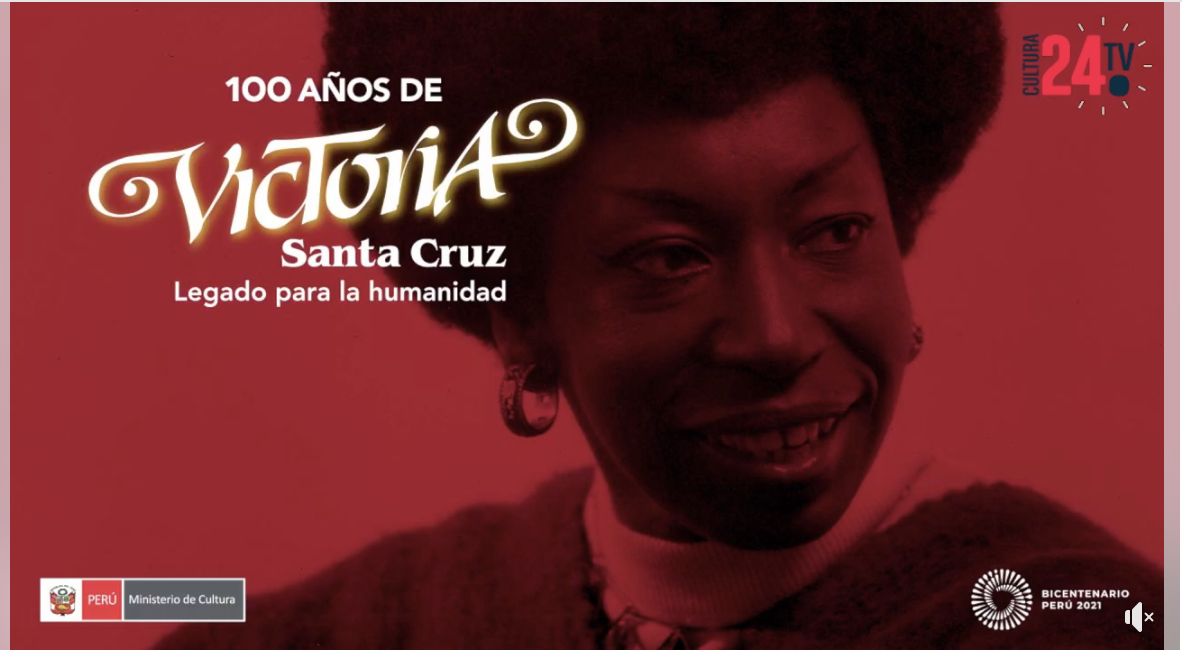 On October 29, 2021, I took part in the very productive and stimulating “Theatre and Revolution” working session at the American Society for Theatre Research (ASTR) conference in San Diego, California. Convened by Emily Sahakian (University of Georgia), Logan Connors and Lillian Manzoor (University of Miami), our group came together to explore the relationship between theatre and revolution, in and across historical, cultural, and performance contexts.

I shared for feedback and discussion a paper excerpted from my manuscript-in-progress, titled “Rhythm and Revolution: Victoria Santa Cruz and the National Folklore Ensemble of Peru, 1973–1982.” My paper explores how Victoria Santa Cruz shaped and staged for Peruvian and world audiences a Gramsci-influenced revolutionary concept of Peruvian folklore as an agent of both individual and social transformation. I explain how the Peruvian Revolution enabled her rise to power as a government folklorist and founding director of Peru’s National Folklore Ensemble, which positioned her to guide individual evolutionary processes in rehearsals and staged performances. As Victoria frequently declared: “There is no revolution without evolution!” Ultimately, her work overlapped with and furthered—but also transcended and repurposed—the utopian ideals of the Peruvian Revolution.

Special thanks to my working session sub-group members Angela Marino (University of California, Berkeley) and Brianna Beemon (University of Minnesota) for their valuable feedback, and for sharing their own research about the Venezuelan Revolution and the Young Lords. 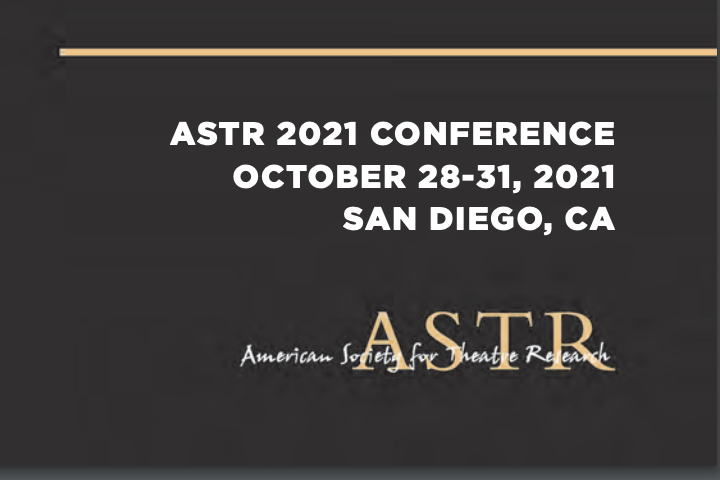 I am grateful to the esteemed American Theatre & Drama Society selection committee for choosing my article “Staging Public Blackness in Mid-Twentieth Century Peru: The Repertoires of Pancho Fierro and Cumanana” (Theatre Survey 2020) for Honorable Mention as a finalist for the Vera Mowry Roberts Award. This award goes annually to the  best essay, published in English in a refereed scholarly journal or edited collection, that focuses on theatre and/or performance in the Americas.

CEDET’s 9th International Seminar: Republic, Racism and  Pandemic: 200 Years of Afrodescendant Resistance was an exhilarating gathering of scholars, artists, and activists from around the world by way of Zoom from Lima, Peru. It was a particular honor to join Octavio Santa Cruz Urquieta, Alina Consuelo Santa Cruz Bustamante, Andernísia Ferreira do Nascimento de Messias, and moderator Juan Manuel Olaya on a panel about the historic resistance, presence, and contributions of the Santa Cruz family. 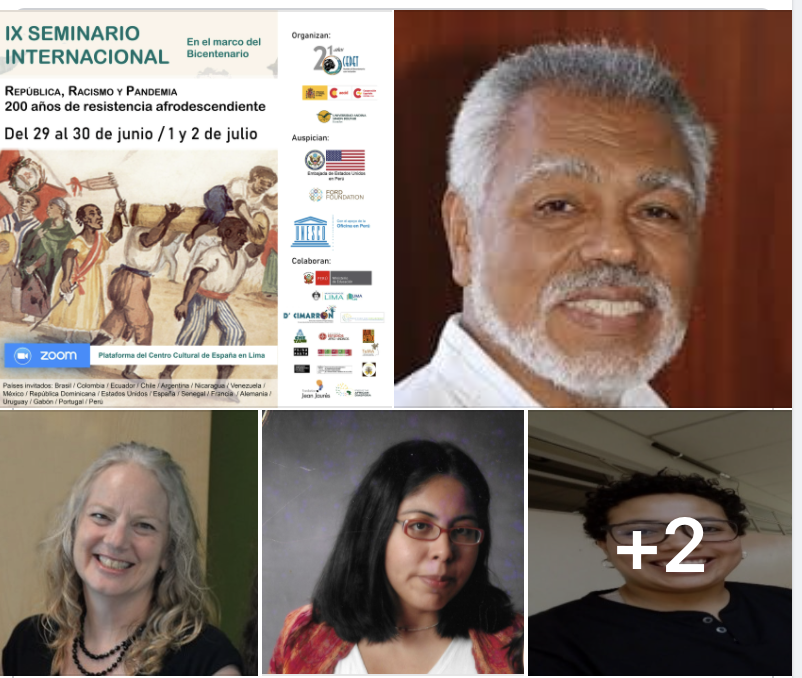 It was a pleasure and an honor to share my research about Victoria Santa Cruz’s transnational rhythmic education philosophy and practice at the international conference “Rhythm in Acting and Performance.” This gathering of international researchers and practitioners took place March 26–28, 2021, organized by Dr Eilon Morris, from Leeds Conservatoire and OBRA Theatre, author of Rhythm in Acting and Performance: Embodied Approaches and Understandings (Bloomsbury/Methuen Drama 2017). The events were hosted remotely from Athens under the auspices of The Makings of the Actor, The Michael Cacoyiannis Foundation, The Labanarium, Leeds Conservatoire and Hellinoekdotiki. 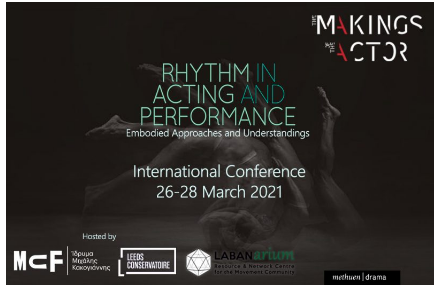 I am honored that Araceli Poma chose to interview me about my research toward a biography of Victoria Santa Cruz in the most recent episode of Araceli’s wonderful program about Peruvian music and culture #SinDistancias. The program (in Spanish with English subtitles) also features the inspiring work of Julie Guillerot (International Festival of the Cajón and AFROPERU) and Matt Geraghty (Just Play’s Grammy-nominated The Warrior Women of Afro-Peruvian Music).

“Rhythm and Revolution” at American Society for Theatre Research Conference

Photo Essay for Dictionary of Caribbean and Afro-Latin American Biographies